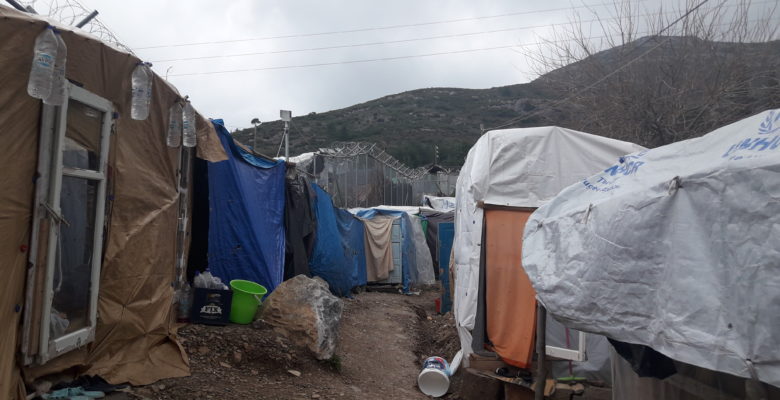 I’m in touch with a young man in prison: he has been living in the refugee camp on the Isle of Samos (see photo). He took part, in fact led, some of the recent demonstrations by camp residents against the appalling conditions in the camp. At the same time, he lost his second appeal for asylum. And suddenly, very suddenly, he was arrested, detained, and transferred from Samos to prison on the Isle of Lesbos, awaiting deportation back to his home country he fled more than 18 months ago. A very well informed friend of mine, who’s lived on Samos for several years, said he has never heard of somebody being transferred so quickly.

I don’t know whether these events are connected. What I do know is that, despite committing no crime, this young man will be imprisoned for at least the next 3 months awaiting deportation. He has access to his telephone only at weekends, when we message. I asked him if  I could write about his situation. He said sure. I asked if he had anything to say, a message for the world outside the prison. ” To be honest” he wrote, “I have no words left. Please just write your blog and I hope that this will have an impact.” Conditions in Lesbos are also harsh: last year the BBC wrote about refugee children attempting suicide due to trauma, and violence inside the camp.

I returned home to England just a couple of weeks ago, after 3 months volunteering with Samos Volunteers. What still stuns, and depresses, me is that people still seem to know so little about these hellhole refugee camps on the Greek Isles. The Greek authorities recently admitted that conditions on the Isle of Samos are the worst of all the islands:  as the Guardian newspaper pointed out in a recent article, there is just one state appointed doctor, and one psychologist, for several thousand refugees crammed into the camp, amidst rubbish, human waste and rats. Outside the camp, conditions are even worse: there’s no running water nor toilets, nor anywhere to wash or dry clothes. This is why the young man now in prison felt compelled to raise his voice and protest.

The photo above, from just outside the Samos camp, is of a self built street running parallel to the razor wire camp perimeter fence. Whilst volunteering, I went into the camp almost every day, to issue laundry tickets, as Samos Volunteers runs the only free laundry service on the island. I visited almost every tent, container and makeshift shelter in the camp, speaking to people from, amongst other countries, Afghanistan, Iraq, Congo, Cameroon, Yemen, Bahrain, Gaza, even asylum seekers from as far away as Nepal, and Ghana. So many refugees are squeezed into the camp, it took us 4 months to issue laundry tickets to them all. Then we started on the outside, which is where I took this photo, early one cold, cloudy morning. I didn’t know whether to be impressed at how innovative people are, constructing their own shelters on the side of a steep hill, tapping into electricity supplies, decorating the interiors: building themselves homes. Or furious they have to do so.

And then there is the asylum process itself: Samos Volunteers has recruited a group of legal counsellors (not lawyers as they are not Greek) who advise the asylum seekers on how to prepare for their cases.  Yet the system itself makes little or no sense, and worse, that can be downright cruel, with children and young adults forcibly separated from their parents, and unaccompanied minor, who, after sometimes sleeping under trees without tents on Samos, may be transferred to isolated camps on the mainland several hours from the nearest city. I’ve witnessed the ferry leaving Samos port with refugees bound for Athens handcuffed together (because they are going to be deported), fathers carrying disabled children, including, once a paraplegic child with no wheelchair, and children helping elderly parents with sticks, whilst dragging bags of belongings towards the ferry. I once almost accidentally sailed to Athens because I was helping a woman and her very elderly mother haul their possessions onto the ferry and had to scramble back onto the quayside.

Some refugee camps on the mainland, such as Scaramanga, located in a vast industrial complex next to the port of Piraeus, are fairly decent and have facilities like health centres and schools. Mind you, another friend of mine who volunteers with refugees on the mainland, laughs when he talks about Scaramanga. He calls it ” the propaganda camp, where EU officials tour around, because it looks good, and they look good in it.”  Others have limited, sometimes no real, security and can be hours away from cities, even in the mountains. Jobs are scarce, and refugees are not always welcome and sometimes shunned. I’ve met refugees who say they were so isolated on the mainland they took the decision to return to Samos, and the camp, for the sake of their own mental health. In three months I saw individuals’ mental health crumble in the face of numbing boredom, bad food, cold, and threadbare psychological support networks that are completely overwhelmed by complex needs, including horrific rates of sexual violence. I interviewed some women about health conditions in the camp: every women I spoke with told me she had, either in her home country or en route to Samos, been raped.

Samos Volunteers,  as the name suggests, recruit volunteers from all over the world to support refugees, including Greek volunteers who defy the assumption that all Greeks are angry and resentful at the refugees in their midst. The situation is complicated, refugees are not angels, they’re as rowdy, rude, troublesome and dishonest as most of us. Their presence has impacted on local tourism in the Aegean islands, angering many who depend on tourists, and some right-wing elements in the Greek government have manipulated this for their own ends. Allegations of  the Greek Ministry of Defence  misspending up to €1.6 billion intended for refugees, are currently being investigated. But many other ordinary Greeks have more nuanced responses, including great kindness and empathy with the refugee communities on Samos. A recent 24 hour ‘strike’ in the town of Vathy (the tiny administrative capital of Samos island) was as much about islanders crying out about conditions at the camp, as well as wanting the refugees to be able to move to the mainland and on to third countries, which is exactly what most of the refugees want too.

It’s very telling that the main source countries of refugees arriving on Samos include Afghanistan and Iraq: our devastating military interventions are coming back to haunt Europe, and until these military strategies change, there’s no way the flow of refugees across the sea from Turkey to Samos is going to stop. Last week I’ve been informed that 300 new asylum seekers arrived on Samos by boat, soaking wet, and hoping for better lives then those they’ve left, or fled. But it is a hell of a risk: the young man I message in Lesbos prison will eventually be taken to Turkey, and then sent home, though he comes from a country wracked with violence, and is still doggedly trying to fight his deportation order. But a tiny number (2 or 3%) win second rejections, and now the Samos authorities are aggressively pursuing those who’ve lost their appeals, conducting searches in the camp, tent by tent, thickening the tensions that threaten to boil over.

I also saw the way security is managed in the camp on Samos, by guards who clearly have no training in crowd control, and shout at refugees who shout back, because they want the same respect most of us expect in our daily lives. Instead these men queue for hours for food (most women say they are too frightened to join queues), battle for medical attention, and wait, and wait, and wait, for their asylum interviews. I know of young men who have been told their first interview will not be until be 2021: until then they are compelled to stake out their lives on Samos, and try not to lose hope. Or their minds.

For more information on the current situation in the Greek Isles, check out the Samos Volunteers website, or one of our sister organisations, A Drop in the Ocean, that operate on the Greek mainland. If you are able to volunteer, it will, whatever your politics, challenge your view of the refugee crisis. And probably change your life.