My mum has these funky friends across the pond in Canada who like kayaking. One day they set off with a bunch of pals, to paddle down a local river. When they eventually stopped to rest, the group realised they had kayaked miles from where they’d intended to go, and were completely lost. “Where the f*ck are we?” Exclaimed one. From that day on, they called themselves ‘the fukarwees’.

That sweary kayaker could be speaking for so many of us right now. The world seems to be unravelling at speed, and not only in Ukraine. Bloody conflicts rage in Yemen (a delicate two-month ceasefire is still just about holding) the Sahel (Mali has recently witnessed its ‘worst’ massacre in ten years ), Tigray (where Amnesty International reports ethnic cleansing & crimes against humanity).

In other contexts the situation is more nuanced, or maybe that should read ‘insidious’. My activist friends in Nicaragua, for example, don’t face massacres. But alongside other human rights defenders, lawyers and journalists, they endure sustained harassment by State agents acting for authoritarian President, Daniel Ortega.

One thing these conflicts have in common is the battle to control how they are perceived. The Russian Internet Research Agency (IRA) apparently has 400 full-time workers creating pro-Kremlin content on diverse social media platforms, including Russia’s Facebook (FB), VKontakte.

These trolls don’t just reflect Kremlin opinion: they create, then shape, public discourse about, amongst other things, the war in Ukraine. They cluster-bomb Russian citizens with a single narrative, asphyxiating space for doubts, or alternative versions of events. Paralleled with draconian anti-free press laws, It’s a highly effective strategy of political warfare. Just listen to this podcast.

Russian trolls have also been linked to fake FB and Instagram accounts in West Africa, though this was small-fry compared to Russia’s expanding military profile in the Sahel (the Wagner paramilitary group was linked to the recent massacre in Central Mali). However, it would be disingenuous to suggest that only the Russian state is up to its neck in peddling online propaganda and falsehoods.

Around the world, state and non-state actors are all at it, and can work from virtually anywhere nowadays. ISIS tapped into social media a decade ago in order to launch global recruitment drives – with great success. They continue to do so, alongside other extremists. This includes far-right groups who use old-fashioned leafleting to spread hate messages.

In Myanmar, where FB represents 99% of the social media market, ultra nationalist monks have used the platform to pump out hate-speech against Rohingya communities, until their accounts were finally blocked a few years ago.

Ethiopian friends of mine, meanwhile, say western media has distorted realities of the war in Tigray, because Prime Minister Abiy Ahmed’s vision of national and regional self-reliance doesn’t tally with US and other interests.

Online propaganda is frequently women-hating too: the London-based Institute for Strategic Dialogue has just published a report on ‘Algorithms as a weapon against women’ exposing Youtube videos luring boys and men into the violent ‘Manosphere’.

In the same way that violent conflicts have increasingly become civil wars within states, as opposed to between them, traditional ideas of physical frontiers are increasingly outdated, especially in virtual realms.

the danger of parrots

I am just finishing a book on some of the challenges we are up against when we try to talk about facts amidst these multiple information firewalls. In ‘This is not propaganda‘ Peter Pomerantsev maps the schemes concocted by some of the most virulent baddies, and goodies, aiming to, quite literally, brainwash us.

He doesn’t’ shy away from Trumpian politics, the Chinese regime’s grip on information – nor UK propaganda, that by the way include previous attempts to discredit Amnesty International.

The heroes and heroines who jump out of Pomerantsev’s book include Maria Ressa, who set up Rappler, the Philippines leading digital media company, in 2012. In the face of constant death threats ( and 22 Philippine media workers killed as of December 2021), Maria’s fight to publish ‘uncompromising journalism’ (her words) earned her the Nobel prize in 2021. She was the first working journalist to be a Nobel laureate since the 1930’s.

Less well-known (at least to me) and just as kick-ass is Srdja Popovic, who specialises in bringing down dictators, including through street theatre involving ‘laughtivism.’

This book doesn’t offer a happy ending – but shares insights into why it is in each of our interests to know what triggers us, especially online. And it makes the essential point that one of the most powerful ways to undermine propaganda is refusing to indulge in criticism that merely parrots it, albeit in negative terms. Crudely, change the language and then you can start to pick apart the indoctrination-speak behind the firewall.

Right-wingers are not always wrong (yup)

In the spirit of diversifying the propaganda I consume, I’m sharing an article from the self proclaimed ‘libertarian’ (i.e. conservative) US Cato Institute. It is not usually my cup of coffee – but this analysis of how NATO has committed ‘one of the great foreign policy blunders of modern times’ regarding Ukraine is insightful, which goes to show that conservatives can be right too. It also goes part way to answering the horrific conundrum of where the fukarwee and how we got here.

Let’s be honest, if you (and I) only read what we think we already agree with, then we co-opt ourselves. I have learnt a lot from people I presumed I did not agree with. Let’s read more by people who don’t just parrot our own views back to us, and learn to interrogate ourselves.

I finished this is not propaganda filled with a mixture of despair and a few sparks of hope. Like many of us, Peter Pomerantsev comes from two places (in his case, Russia and Ukraine). And that, ladies and gentlemen, is where I’m heading next. My next post will be from the Poland-Ukraine border, where I’ll be working with a humanitarian organisation…….. do visit for virtual updates.

That’s it for now – thanks for reading – and Happy Friday !

postscript: the mural at the top was painted in Brighton and I call it ‘Ukraine embrace’. Thank god for good graffitti…. 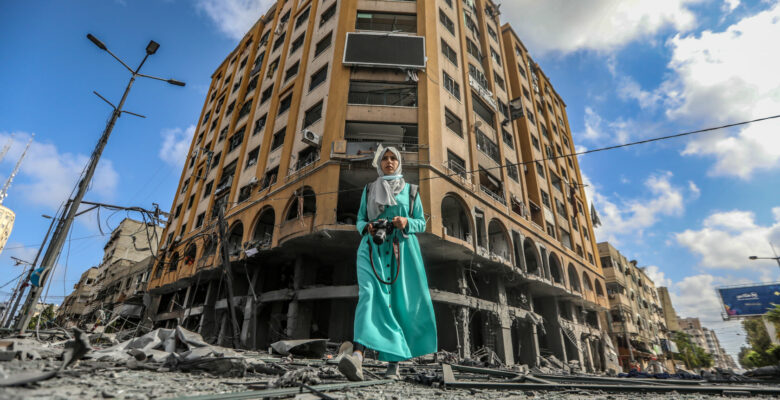 Yesterday, I heard a familiar voice on the radio. It was an old friend of mine from Gaza. Her name …