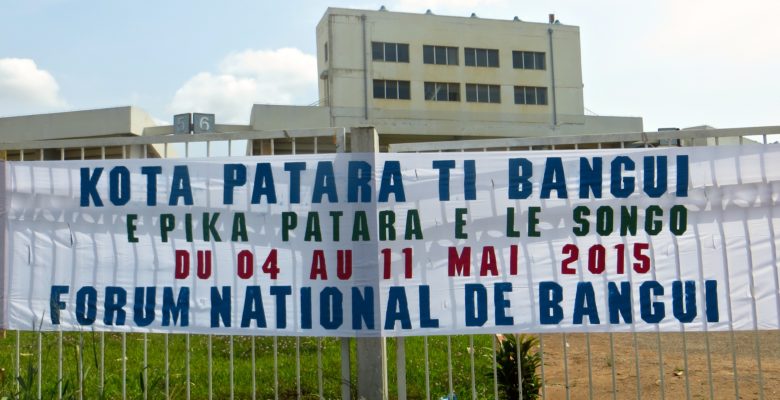 The Bangui National Forum is just over. The last speech rang out in the Parliament late this afternoon; tomorrow’s Air France flight from Bangui – Paris will be packed with suits, flying back to Europe to file reports on possibilities for peace in CAR. 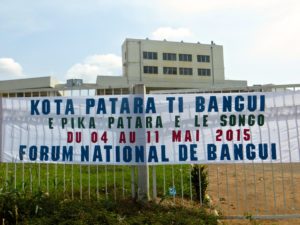 For those of us who are not leaving (I’ve been here almost two years now) there are a lot of questions to ask: when do we get to read the final report, why did ten armed groups sign an ‘end of hostilities’ agreement without negotiations on how to resolve their demand for a full amnesty for all ex-Seleka / anti-Balaka prisoners currently detained in Bangui’s Ngaraba prison?  What is the CAR Transitional Goverment’s follow-up strategy?

I attended the forum as an observer – and am glad I did so because I learnt so much about this flawed but crucial peace process. Bascially, the forum had a series of ‘commissions’ or working groups where the 600 or so participants debated recommendations on peace & security, justice and reconciliation, economic and social development, and governance.

En plus, participants were invited to intervene, for three minutes a time, to offer points, share experiences and contribute to the debates. For Central Africans three minutes was not enough; many people said this was the first time they’d ever had the opportunity speak about their experiences in public; I watched a sea-change as people grew in confidence and stature, and began to demand their rights to speak and to be heard.

Members of ex-Seleka and the anti-Balaka sat in the same room, debating security and disarmament, often noisily agreeing with each other. The governance commission, which I didn’t attend, was apparently full of politicians fighting it out – while civil society activists were at the justice and reconciliation commission. Numerous recommendations were drafted – too many for a Transitional Government with a limited mandate, no date for elections and no funds to implement a national action plan. I was dissapointed by the vagueness of many recommendations, especially re justice and reconciliation. The special follow-up commission announced today by the President is the only mechanism in place to track what happens post forum in a country exhausted by years of chronic conflict.

But the success of the Bangui National Forum was the fact that, despite too many participants, fiercely competing political interests and the reek of foreign interference – it has taken place, and the Central African people spoke out loud. There was public concensus on vital issues – the necessity of a nationwide voluntary DDR program, peace education in schools, a new citizenship that has nothing to do with religion, a transparent roadmap towards elections, and no amnesty for ex-Seleka and anti-Balaka detainees in prison.

The follow-up commission is vital: it needs to be filled with passionate civil society activists who’ll be committed to pestering the Government to develop a national strategy of peacebuilding in CAR, and practical action plans that will ensure at least some of this works. When President Catherine Samba-Panza arrives in Brussels on the 26th of this month on a mass fundraiser, she needs to convince European donors to contribute to her vision, which means she needs to have one.

Less than 24 hours after ten armed Central African groups signed a cessation of hostilities agreement, some of them were already at it again: roads were blocked by men with arms and I heard the shooting as I was walking quickly towards my car. This really could go either way.