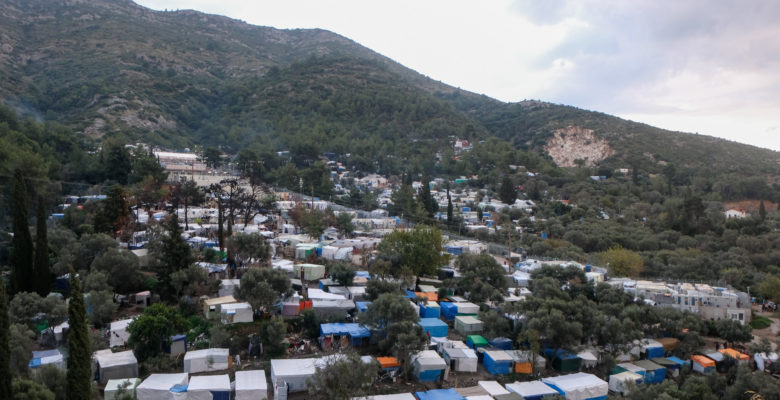 Last New Year’s Eve, I was in Greece, sitting round a beach fire on the isle of Samos, just a few kilometres from the coast of Turkey, drinking I can’t quite remember what. It was a cold, breezy night: we were wrapped up, laughing, planning a swim the next morning. I actually did it, and the early-morning sea was hangover-curing cold, and I glowed like a pale Goddess afterwards.

I left Samos mid-February this year, worn out from working long hours with Samos Volunteers (SV) who’ve been supporting refugees on the isle since the start of 2016, purely through through private donations (appeal for SV at the end of this post, please donate whatever you can 😛 ). Originally I came to Samos in August 2016 to spend a month with SV. We distributed donated clothes inside the refugee camp, where we also taught informal English classes, and ran activities for the camp kids, who were mainly from Syria, Iraq and Afghanistan. 1,300 or so people were crowded into the camp, on a steep hillside originally built for 500 Greek troops.

I returned to Samos eighteen months later, in November 2018, and was stunned by developments: 3,500 refugees were now  crammed into the camp, literally on top of each other. But the camp was too small for them all: some had spilled out across the hillside, erecting flimsy tents bought from the local Chinese supermarket for €25. The tents blew away, got flooded because it rains a lot in Samos over winter, and gave them no protection from the wet cold. This exposed space is known as “the jungle“. The camp itself was rimmed with razor-wire, tense and dirty. The Greek authority had banned Samos Volunteers from working inside the camp. SV responded by opening a local community centre, where they teach language classes, plus psychosocial activities, and a laundry station where refugees can wash, and dry, their clothes, for free. When you live in a sodden tent, the dignity of clean laundry is no small thing.

Refugee boats kept arriving. By the time I left Samos in February 2019, more than 4,2500 refugees were registered. Everyone was struggling to cope, including SV, who needed to ramp up their activities. Samos was a forgotten crisis on a remote island abandoned to its own devices.

The number of refugees on Samos is now the highest ever recorded: more than 7,000 refugees stranded on an island of just 33,000 residents. There are more refugees in the camp than in nearby Vathy town, which serves as the island’s capital. To put this into perspective, it’s like 60,000 refugees arriving in the town of Brighton, where I currently live. Refugees are waiting up to two years for their formal asylum interviews, leaving individuals desperate, depressed, their lives suspended. They live on camp rations and €90 per month.

In Vathy, I’ve seen local Greeks veering from pity to anger and disgust towards the refugees. Some local shopkeepers refuse to serve them, especially black people. Some local restaurants refuse to sell them food. There are also refugees who treat local Greeks rudely, who steal from them, and get drunk on the seafront in this very conservative town. The sad irony is that, when refugees first arrived in Samos in 2016, local Samian men rescued them at sea, local women cooked for them, sometimes took them into their own homes. But as resources were stretched taut, the one hospital on the island was overwhelmed, tourists cancelled trips, and the local economy, propped up by summer holiday-makers, began to tank. Miss-understandings have hardened into waves of mutual fear and loathing.

There are exceptions: a handful of Greeks work alongside Samos Volunteers, a minority of local teachers have campaigned for refugee children to join kids at the Greek schools. The Greek church houses some Christian refugees. But the situation has taken a terrible toll, on relationships between locals themselves, as well as between them and the communities of refugees – who also fight between themselves. There is still just one full-time doctor inside the camp on Samos, and a sole psychologist. In the words of an old friend, who has volunteered here most of these last four years, “Samos is a cruel social experiment.”

Throughout this long, inhumane crisis, Samos Volunteers has stayed on the isle: I am about to return to Samos, as SV are short of volunteers for winter, and need as much help as possible. I’ve launched a Go-Fund-Me appeal to support their work. Please share this blog post, support the appeal if you can, and spread the word. That everyone on Samos deserves better than this inhumane, man-made, solvable political crisis that is tearing the island apart.