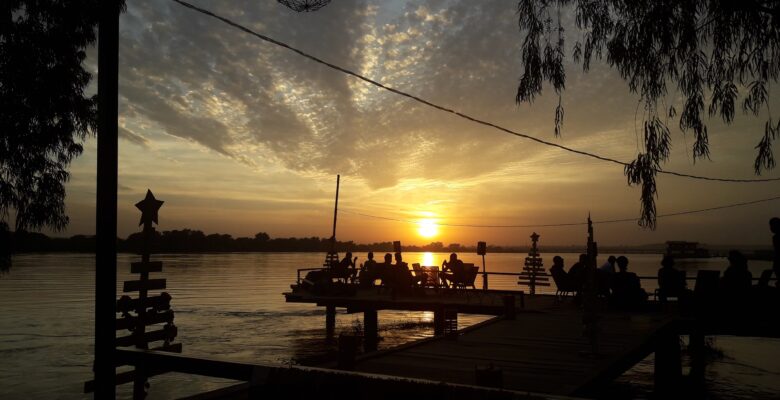 The worst thing about having Covid was the anxiety. The fourth or fifth morning I had a hiccup of breathlessness and felt knived with fear: if I can’t breathe and need to go to hospital, or the ICU here, what the hell? I wasn’t at home you see. This was a couple of weeks ago, in mid December. I was doing some work in West Africa – Niger to be precise – one of the poorest countries in the world. Not ideal.

It was almost the end of my three-week research trip when I got the virus. I’d done most of the work and was spending the last few days staying with an old friend. Bob is a humanitarian worker who lives in a big, sunny house in Niamey, with a big sunny garden full of flowers, and a swimming pool. Seriously. Even the doctor from the insurance company laughed. “You’ve done alright” she said down the phone. “And you don’t sound seriously ill, I think you’ll be fine in a week or so.” Bob had just tested positive too. One of us probably gave it to the other – so we both owe each other drinks for life.

We quarantined together in his house with the dogs, and made lots of bad jokes about the uncertainty, especially the three working ventilators in Niger (that was the rumour). But when I called my mum and told her I had Covid and she cried, so did I. Being so far away from home and so vulnerable was an emotional juggernaut.

A week later I was still knackered, but starting to feeling well again: my muscles were weak but not aching. I could stay up for half the day. But getting home was uncertain. My flight to London was cancelled because of the new Covid strain in the UK, and the insurance company emailed to say I wasn’t covered for Covid. They wished me “good luck in getting back to the UK”. with the sincerity of sharks circling lone prey. I took another Covid test. When I opened the paper and saw the result I cried again. This time with relief. And then the airline reinstalled the flight. It was an early Christmas present.

I watched a final, beautiful Niamey sunset with Bob (that’s the photo above) and drove straight to the airport. I’ve had a life-long nomadic virus, I love Niger (that’s for another blog) and could not wait to get back to my flat in Brighton. There’s nothing like knowing you can’t be sure of getting home to make you crave opening your own front door and collapsing on the couch.

I landed in Heathrow Terminal 2 on Christmas eve, went straight through the E-gate and off to get my bags. I was staggered. The only thing I’d done was fill out an online form in advance of boarding the flight – where I’d exempted myself from quarantine, because I’d had a second negative test just before I left Niger. No-one took me aside, there were no questions. No-one even asked to see the negative test. At the airport in Niger my test certificate was checked four times before I got on the airplane. Niger is poor, Britain is rich and well equipped. What the hell?

Surviving Covid has actually made me feel more wary of mixing, because I’ve no certainty at all about my post-viral immunity. What I do have is a quiet, bright joy at having got off so lightly with the virus, because at the beginning I didn’t know how ill I would be, and that was unnerving.

Uncertainty carries the possibility of things being better than we dread they will be. I actually find political doubters and sceptics more visionary, because they’re open to different possibilities, not trapped in messianic certainty. Uncertainty is the gaunt man lurking in the street who stares, and might be a stalker, or a kind, wise eccentric. We have no certainty about next year, maybe that’s the best thing we can say about it. Amidst the debris of 2020, the year most of us want to kick into the sea, is the glinting possibility next year will be better, and without that hope, we are sentenced to dread.

To steal a few words from Gavin Francis (a doctor in Edinburgh) uncertainty, like depression, “demonstrates the capacity to imagine something different, and that spark can be a motive to change whatever we can”. I’m staying in tonight and drinking to everything that is possible in my life and my world during these weirdo times.

Better new year to each of you!