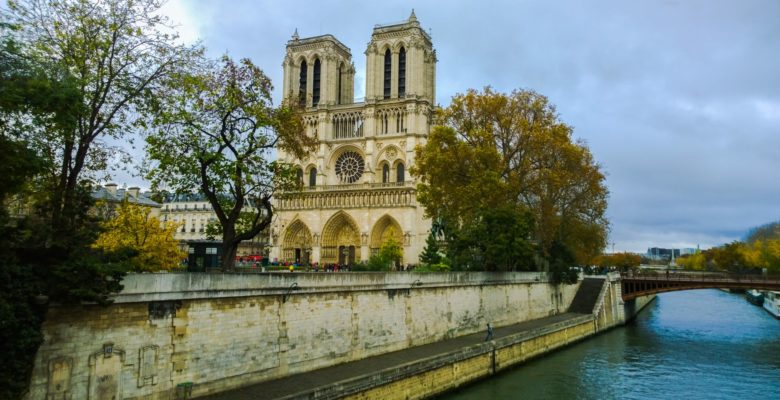 I love cathedrals: the spaciousness, the stone flag floors and rising columns, archways and sensual stained glass. The echoes of history, walls soaked in hymns and chanting, the overall aura of something sacred that often makes me want to kneel and pray in gratitude for everything I have. Whenever I go to a new city, if there’s a cathedral to be visited, I’ll be there. Notre Dame is (was, will be again) a glorious and exceptional, icon-filled national icon, constructed back in the mid 12th century, and completed by King Louis V11 in 1345.

But, I confess I shed no tears as it burnt. Because like every other cathedral in the world, it is a beautiful shell, and though I don’t doubt it’s deep religious symbolism to many Christians, and non-Christians, people are far more important than any structure however beautiful or awe-insipring.

According to hot-off-the-press news sources, €700 million has already been pledged towards reconstructing Notre Dame by some very rich and famous businessman, including Patrick Poyanne, CEO of French oil company Total, who’s pledged €100 million. This hefty donation follows on from Paris mayor Anne Hidalgo’s €50 million donation, whilst L’Oréal and the Bettencourt-Schueller Foundation has committed €200 million. The whiff of irony here is two-fold: first of all, this list of those with deep pockets full of readies makes no reference to any forthcoming dosh from the Catholic Church itself, which given the Church is worth an estimated $10-$15 billion (its Italian stock holdings alone run to some $1.6 billion says Time Magazine), does make you wonder why it isn’t coughing up for these repairs.

Secondly, these donations could be doing a hell of a lot more than paying for the reconstruction of a mediaeval Catholic cathedral owned by the French Ministry of Culture. Such as supporting some of the 68.5 million estimated refugees across the world, including some 4.39 million displaced across Europe. Having recently spent several months working in a refugee camp on the Greek isle of Samos, I know what conditions are like for some refugee communities in Europe: it is shocking and haunting to see people surviving in squalor (wet tents, no toilets, no access to showers, vital psychological support services, nor any vision of a future) in Greece. A fraction of €700 million would utterly transform the lives of thousands of displaced individuals, including unaccompanied children, some of whom were sleeping under trees outside the camp in Samos, without even a tent to shelter them.

And then there is climate change, or rather climate catastrophe. According to the Climate Disclosure Standards Board (CDSB) the costs of adapting to climate change in ‘developing countries’ could rise to between US$280 – 500 billion. That’s a fair whack more than it costs to repair a cathedral, and would be of a lot more benefit to most people in this world. We are all contributing to climate degradation, though some much more than others. At the end of 2015, Total (now donating €100 million to Notre Dame) was fined more just £1 million for safety breaches that led to a potentially catastrophic leak at the Elgin Gas Platform in the North Sea. According to the Guardian newspaper, between 2000 and late 2012, at least 4,123 North Sea oil leaks were reported, and just seven fines were issued to oil companies during the same period. Which really scrapes the barrel in terms of corporate deterrence.

The World Economic Forum, in its recent Global Risk Report says that for the third year in a row environmental risks represent the greatest threat facing the world, ranking three out of five in terms of (impact) likelihood. Climate mitigation strategies cost money, and as Extinction Rebellion are showing us, we cannot afford to ignore the catastrophe towering in front of us that is of our own making.

So, what would you do with €700 million? Support refugees, build climate adaptation mechanisms for all our futures, or rebuild a mediaeval cathedral despite the awesomely rich Catholic church? Jesus himself was a fierce iconoclast who lambasted the temple rulers for hoarding wealth: in terms of Notre Dame’s potent religiosity, the most symbolic act of all would be to give these donations to those who need them the most.